America’s Cup – Brother can you spare a Boat?

The latest AC36 farrago kicked-off when Stars + Stripes Team USA asked the Arbitration Panel to be allowed to use ETNZ’s first AC75 in the Prada Cup Challenger Selection Series.

While there was much media outcry, to date no reaction from the Challenger of Record or the other two challengers, and the AC36 Arbitration Panel discussions are not public until the decision is issued.

All very much par for the course as far as America’s Cups go, with inter-team rows and court cases the norm when multi-millionaire egos clash. And this elephant in the room had been ignored for some considerable time.

It was known that the Stars + Stripes team were struggling and it seemed to be assumed by everyone involved that they had already packed up and slipped away into the night.

But, they were still there, doing who knows what . . . ‘Building an inclusive, authentic American team to win the America’s Cup and inspire the next generation’ . . . but not apparently managing to put together yet the flat-pack NZL AC75 version they had purchased. 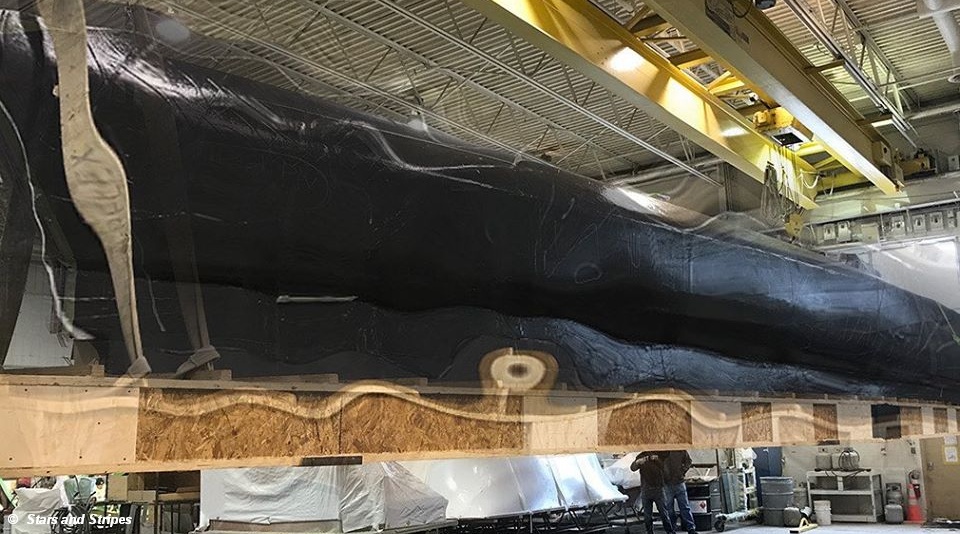 The last image (above) seen of their slowly, slowly, build programme was back in October 2019. Latest progress not known.

Stars + Stripes Team USA is considered ‘almost’ a valid entry for the America’s Cup, having paid at least USD$1m of the USD$3m entry fee required.

And as no one had bothered to officially pull the plug they seem to have decided to give it one last shot . . .

Why not take the defenders soon to be old boat, built outside their home country, which they won’t get their hands on until a couple of weeks before the event, and give it a whirl.

Obviously hoping that ETNZ, with all their political/financial problems, would be glad of the spare change to get Te Aihe off the dock and claim another live entry.

But what is the Stars + Stripes Team USA game plan?

If they get their hands on Te Aihe, after ETNZ roll out their second AC75 and have trialled it sufficiently to check it is in fact quicker than Te Aihe, Stars + Stripes have to start training on Te Aihe-USA . . . their first ever sailing on an AC75.

If that happens sometime in November, Stars + Stripes would then need to race in the America’s Cup World Series (ACWS) from 17 to 20 December 2020 in order to qualify for the Prada Cup Challenger Selection Series in January and February 2021.

Note that the teams must pay any outstanding amount of the USD$3m Event Fee, three months before the Auckland ACWS event i.e. 17 September 2020.

For the Prada Cup Challenger Selection Series, they would need an AC75 ‘constructed in the country to which the Challenging Club belongs’ i.e. Stars+Stripes Team USA is representing the Long Beach Yacht Club, USA.

This would rule out Te Aihe-USA, unless there is some dramatic change to The Protocol for the 2021 America’s Cup match, and would require Stars + Stripes to complete the hull that they are part way through building back in the USA.

Editor note – Although Stars + Stripes do not appear to have mentioned the ACWS event and its attached Christmas Race in their Arbitration Panel request, any AC75 used in those events, assuming that they are not cancelled, must also comply with The Protocol, constructed in the country requirement.

And therein lies the problem.

1 – Can Stars + Stripes Team USA complete their USA build hull to a state that they can get it to New Zealand in time to complete the final assembly, launch, test and training?

2 – Can they do that in time to take part in the first Configuration Declaration, due by 15:00hrs on Wednesday 13 January 2021 for the Prada Cup Challenger Selection Series?

3 – If, as seems likely from their Arbitration request, they do not think they can complete the first two points, then they require a major re-write of the rules, with everyone agreeing!

As Mike Buckley and Taylor Canfield, the Stars + Stripes Team USA principles, have failed so comprehensively to get any sort of team together upto this point, why do they think they will find the magic go-fast button now.

To date Buckley and Canfield have not issued any official statement explaining their position or the thinking behind it – if they have any – other than it looking like one final desperate throw of the dice before they become an AC footnote.

What do the other challenger teams think of the Stars + Stripes Team USA move?

What does the famously touchy Patrizio Bertelli think of all this?

Will Bertelli and Luna Rossa Prada Pirelli – the Challenger of Record – pull the plug on this America’s Cup as they did in 2014 and just leave New Zealand to deal with the remains?

No comment to date from the American Magic team, who are in Auckland and sailed Defiant on Waitemata Harbour on Monday.

INEOS Team UK have been approached for comment, no reply to date.