Going into the final day of the 44Cup Cascais, the dominant Charisma has managed to recover the six point lead she had after her exceptional opening day here when she scored straight race wins.

After two days of sun, Atlantic swell and prevailing northwesterlies, conditions turned around for day three of the 44Cup Cascais. Overnight the wind veered into the south and in the morning the eight RC44 teams waited ashore for an extra hour and half as the wind filled in.

Despite the about-turn of the race track, the hard right again was favoured and in the sub-10 knot conditions it was Nico Poons’ overall leader, Charisma, Chris Bake’s Team Aqua and Hugues Lepic’s Aleph Racing that went all the way to the starboard layline before tacking.

After going the wrong way up the first beat, Charisma gybed early on the run, and finding better pressure she was propelled from seventh to second.

She was able to follow Aleph around the starboard gate mark and out to the right. Both played the shifts well up the second beat and, with Ceeref in third, they gained separation which they held to the finish. 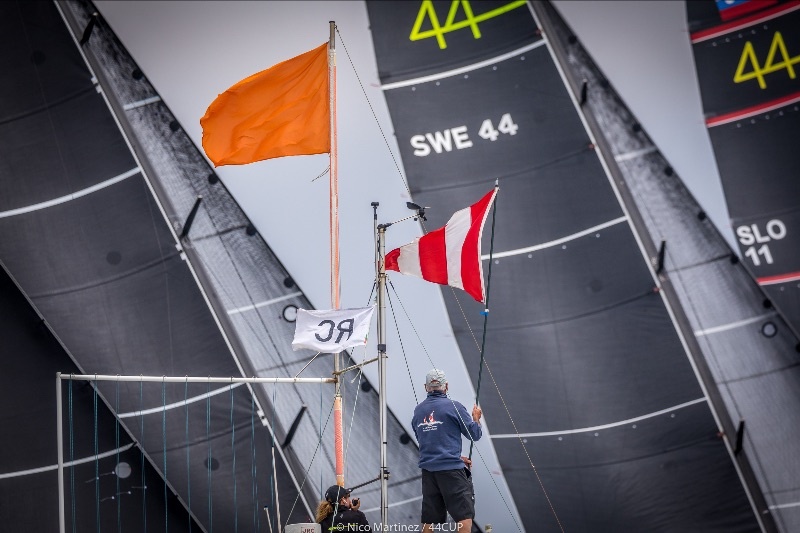 A short delay saw the wind drop and return for a second race, but in continued light conditions.

Charisma and Ceeref went hard right out of the start, but then on a long starboard tack across the course they managed to cross ahead of the entire fleet. Charisma rounded the top mark first with John Bassadone’s Peninsula Racing pulled into second ahead of Ceeref.

The lead boats all gybed early heading out to the favoured right, especially favoured thanks to a wind shift to the right. The lead trio remained the same to the finish but with Ceeref edging past Peninsula Racing on the second upwind.