All classes in the 12th Cowes Classics Week fleet had to kick their heels on the Cowes waterfront until enough wind finally arrived at lunch time for racing to start.

Cruiser classes including classes 1, 2 and 3 finally got away on a short race from the Club’s shoreline start.

As the yachts headed north and found a little more breeze Sunmaid V was able to pull ahead and finish once again in first place, after the course was shortened, keeping her a point ahead of Aeolus after five races.

In Class 2 James Mehew’s S&S She 31 Sheba romped away to the first mark extending her lead to a win.

Class 3’s Contessa 26 Coco of Parkstone looked immaculate despite being built in 1975, and seemed almost unbeatable but it was the pretty William Fife 111 design Intombi sailed by Neil Martin, who pulled ahead to win today’s race.

With the forecast wind strengths looking light again for Friday, Race Officer Derek Hodd and his team were keen to get the races in. 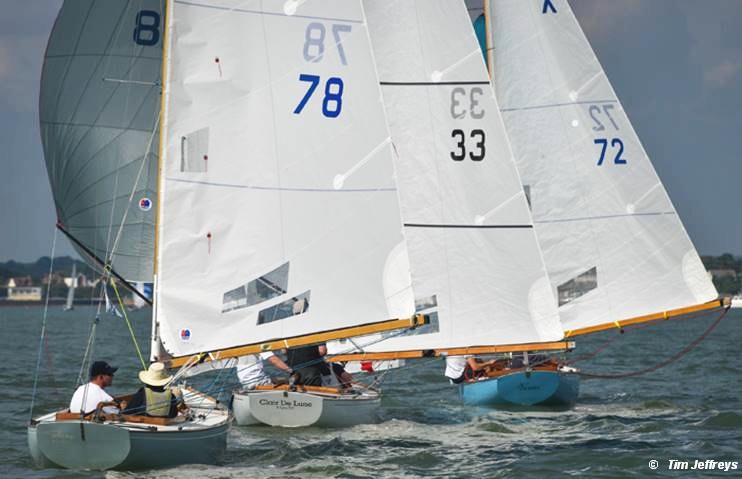 The Folkboats and Gaffers got a start but also had their courses shortened.

In the Gaffer class Spinaway X, the 1889-built Plymouth Hooker and Mouse, a Oysterman 16 modern gaffer managed to finish in a draw on corrected time, but Spinaway X has the edge on the series so far.

The committee boat race areas away to the north near Hill Head had more luck.

The Darings also enjoyed a belated afternoon of racing on the adjacent race area. It seems no one can beat Dauntless with Richard Acland at the helm, but their straight run of five wins was brought to an end in the final race.