Olympic Silver Medallist Luke Patience and Mary Henderson take a well-deserved win, but they didn’t have it all their own way.

Following his selection for a third Olympic Games, Luke Patience took time off from the World Cup circuit to compete in the RS200 Inlands at Grafham Water.

Sailing with Mary Henderson they topped the championship leaderboard after five races, with a two point lead ahead of James Peters and Charlie Darling, with Will and Matt Taylor taking third a further two points back.

Patience and Henderson opened the scoring by winning the first race ahead of Will and Matt Taylor, only to crash to a 20th in the second race, as Edd Whitehead and Toby Lewis recovered from a botched attempt at a port end flyer in the first race, with a win in the second.

The third and final race of the first day saw Patience and Henderson take another win.

This time finishing ahead of Peters and Darling, who had been laguishing in double figures in the two previous races, with the Taylors also back into the top three.

Top of the pile after day 1 were David Jessop and Sophie Mear, rewarded for their 4, 4, 4, consistency with the overnight lead. 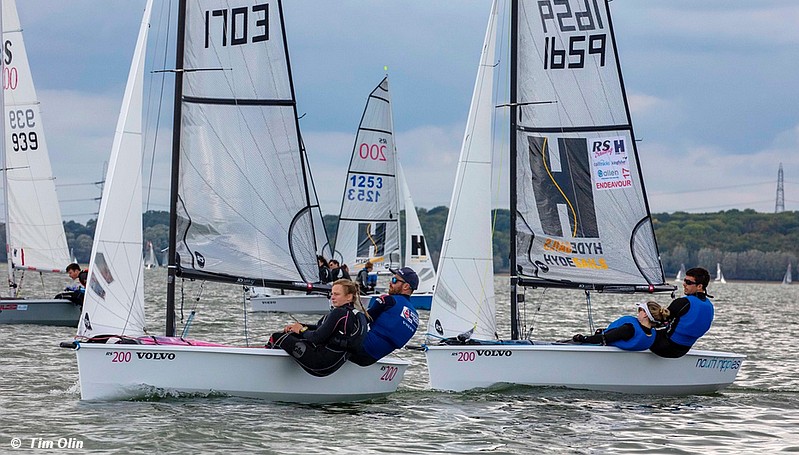 Moving into day 2 with the breeze picking up through the day from 15 knots to 23 knots.

Nick Craig and Emma Hivey won the fourth race, with Ian Martin and Chloe George in second and then, what was beginning to look like the usual suspects . . . Patience and Henderson in third and fourth Peters and Darling.

Into race 5 – that would become the final race – and this was a win for Christian Birrell and Katie Burridge, with Peters and Darling in second and Alan Roberts and Arthur Henderson third.

Patience and Henderson finished down in 15th and the Taylors were ninth, setting things up for a classic final race shoot-out.

But, with the increasing wind strength further racing was abandoned and all bets were off, as the 2019 title went to Luke Patience and Mary Henderson.